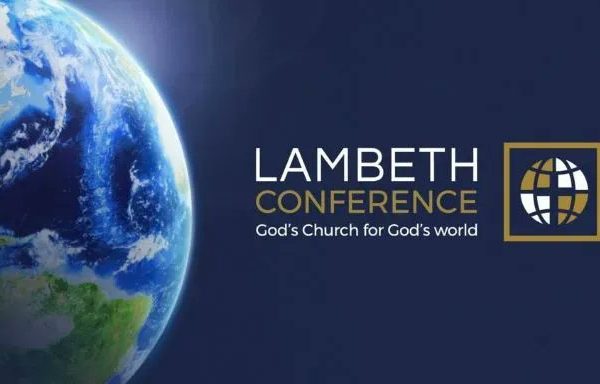 This week marks the beginning of the 15th Lambeth Conference, one of four official “instruments of unity” in our Anglican Communion. The Lambeth Conference takes place every ten years, with the express purpose of gathering together Anglican leaders from around the world to assess the state of the Communion and hear what God might be saying to us in this time. The theme for the Conference this year is simple: God’s Church for God’s World.

Because this only happens every ten years, I thought it might be helpful to consider two questions: what is Lambeth, and what does it have to do with us at St. John’s?

As Episcopalians, we understand ourselves to be oriented around Christ by the common witness of a global body called the Anglican Communion, a communion held together more than anything by “Bonds of Affection,” love. As one document reads, “The Anglican Communion is a fellowship of churches within the One, Holy, Catholic and Apostolic Church, characterized by their historic relationship of communion with the See of Canterbury.” A revolving point, the Archbishop (presently Justin Welby) is the one who calls us together, but the Archbishop is not a top-down role (that is, with central legislative power). Each province is, instead, linked more by the ministry rather than the authority of the Archbishop of Canterbury, somewhat akin to the way that the apostle Paul asks his congregation in Corinth to, “Take after me as I take after Christ” (1 Corinthians 11:1).

In its global governance, Anglicanism tries to uphold a very difficult line between autonomy and interdependence. This puts the nature of Lambeth Conference in a peculiar place. Like the Archbishop, Lambeth is not a vehicle for legislation. By committing to autonomy, what is binding for one region is not binding for another. This is perhaps most clearly reflected in the diversity of our liturgical expressions. For example, The Anglican Church in Aotearoa, New Zealand, and Polynesia authorized a prayer book published partly in Te Reo Māori, the language of the Māori people. This prayer book was authorized by the province’s General Synod in 1988 forms the base of their liturgical life. However, this prayer book was not drafted for use here, by our General Convention, so we could not, one Sunday, pick up a Eucharistic prayer from the New Zealand Prayer Book and claim it as our own. Each province is tasked to discern the life of God in their own province and in their own language(s). Yet no province supplants another with a “true” worship. Instead, the Communion itself puts forth a rich, kaleidoscopic picture of God as we gather around Canterbury.

By committing to interdependence, we have committed to walking together instead of walking alone. A gathering of this nature has less to do with affirming uniformity than with affirming unity. In the Gospel of Luke, Jesus gives his disciples authority to preach, to heal, and to cast out demons, then sends them out on their way (9:1). But the vignette ends really when the disciples return back to Christ to “discuss with him all that they had done” (9:10). This is how we might think of Lambeth: gathering together to speak with Christ. Anglican leaders read scripture together, vote on exhortations together (“Calls”), even search for articulations of what it means to be Anglican; but they do not necessarily meet to decide anything. Instead, what Lambeth tries to capture is what Christianity offers in its fullest expression: a global participation in Christ.

At St. John’s, we are affected by Lambeth insofar as we bind ourselves to one another and to the exhortations that emerge from Lambeth. I encourage you to look at the links from yesterday’s epistle. There have been, and still are, times of significant disagreement about what discipleship means, but these “Bonds of Affection” hold within them a promise more meaningful than agreement. This is, anyway, all that has ever held a Church together: loving Christ and loving one another. Above all, Lambeth represents the reality that none of us is a Christian alone, not really.

Update Personal Details
Your ticket for